Comments from the Dwarf Tomato Project:

Barossa Fest originated from a cross between Golden Dwarf Champion and Green Giant by Patrina Nuske Small in 2005 which she named Sneezy.  Barossa Fest is an indeterminate potato leaf dwarf and is among the tallest of its type reaching around 4 1/2 feet by end of season.  It produces abundant small pale yellow globes that have a sweet and tangy combination of flavours, bright and fresh on the palate and delicious.  The Barossa Valley is one of South Australia's premier wine-growing regions where vintage festivals are celebrated each harvest season. Main growers were Patrina and Craig with help from Lou Larrieu and Carl Matthei. Seeds for release grown by Bill Minkey.

For more information on the Dwarf Tomato Project check out the project's site here or Craig's site here.

Patrina Nuske Small and Craig LeHoullier (co-architects of the Dwarf Tomato Project) have released this variety under the Open Source Seed Initiative (OSSI) pledge:
“You have the freedom to use these OSSI-Pledged seeds in any way you choose. In return, you pledge not to restrict others’ use of these seeds or their derivatives by patents or other means, and to include this pledge with any transfer of these seeds or their derivatives.”
More information can be found here. 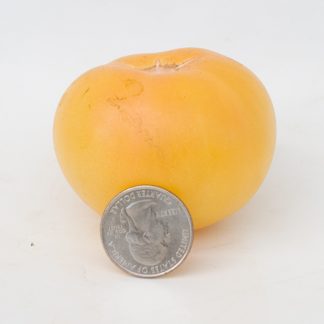