“Fuzzy Wuzzy” was a bear. But in this case, he was a dwarf tomato variety. Unlike Fuzzy Wuzzy the bear who had no hair, and so wasn’t very fuzzy, wuz he…this variety has soft, grayish-green velvety foliage. On a compact dwarf plant, it is almost like having a little furry pet in a pot. My plant topped at less than 2 feet tall, but I have read that they go to 2.5 feet tall when grown elsewhere.
The fruits themselves are slightly fuzzy, but not so woolly as those of Woolly Blue Wine and a few others. Mine were strongly torpedo-shaped with pointed ends. The flavor was actually much better than I had expected. I was thinking that this was a fuzzy version of something like Bonte Tigret; however, the flavor, while not fancy, was that of a simple good tomato.
The history of Fuzzy Wuzzy, other than who shared the seeds first, is unknown. 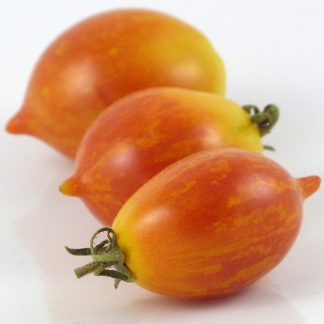