“Largo de Reus” is a large, red, elongated sweet pepper from Spain, named after the city of Reus in Catalonia (as far as I know), and long as the word “largo” indicates. It reminds me much of Ros de Mallorca, except that the plant growth is just a bit more restrained. Ros de Mallorca makes a very tall plant for me by the end of the season, and the fruits are not as large as those of Largo de Reus. Largo de Reus makes very sweet, thick-walled long bell-type fruits that are not as thick-walled as grocery store bell peppers. Yum! I have new photos for this season, and found out that it does matter with this variety if it has room for the roots and plenty of nutrients. I grew it in a patch of well-amended soil and the fruits were very large. 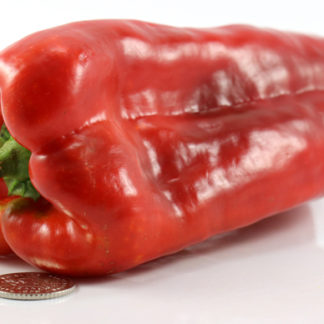