“Early Wonder” began as a red globe tomato sold by Burgess Seed and Plant Co. Burgess Catalog around 1950. Somewhere along the way, the same tomato name was used to sell a very similar pink tomato, listed by a popular seed vendor. The vendor’s listing states that the tomato is a “dark pink,” but still calls it “Early Wonder.” Seeds saved from this pink fruit by other growers have since been called “Early Wonder Pink.” I do not really know if this is a pink cross from the original red, or if the popular vendor had the wrong variety but did not realize that it was the wrong color. In any case, I have the pink version (red flesh and clear skin), and it is a winner! The fruits are smooth and beautiful, as well as larger than I would expect from an early variety. In fact, this is not what I would consider a 55 day variety, as advertised. It was more like 75-80 days. The flesh is smooth, and the flavor is a really excellent balance of sweet and tart. Early Wonder and Early Wonder, Pink are both described as determinate, and mine was easy to grow in a 5 gal bucket. Notice the small crack in a fruit in my photo. We had just received deluge rains, and all of my tomatoes were cracking. Early Wonder, Pink, showed a little cracking but not as much as most others did. The core is small with little wasted fruit. Highly recommended. 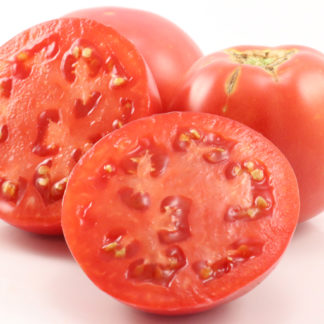