“Spring Noire” has a name that might have caused a little confusion for those who are fluent in French. It seemed that, following the gender rule for adjectives and nouns in French, the spelling would have been “Noir.” In fact, my seed packet that was purchased from a vendor did spell it that way. Tom Wagner is the breeder, however, and he was able to tell me the correct way he named this variety:
“The ‘Spring Noire’ is correct by English standards of gender. Besides my naming conventions are a hyphenated style ie Spring – Noire Reflects the pedigree Oregon Spring as the female.. Ananas Noire as the male The breeder has the say on the given name….PERIOD The name reflects my thoughts and not French language per se.”
Some may describe the appearance of Spring Noire a tricolor, but to me it is a bicolor green-when-ripe flesh with red. It probably gets more golden than my photo shows when ripening on the plant in the heat…I had to pick these early due to the voracious insects. The epidermis is yellow, and I found the flesh succulent and deliciously sweet, an excellent flavor. The appearance strongly reminds me of the Ananas Noir (Noire? “Ananas” is masculine…should be Noir? I could go round and round here…) parent. I did have far greater success growing Spring Noire than I did trying to grow Ananas Noir. Naming issues aside, this is an excellent tomato.
NOTE: I have added extra seeds to each packet because my germination percentage was 90%, which is far above the industry standard for acceptable tomato germination, but a little less than my own personal standards. 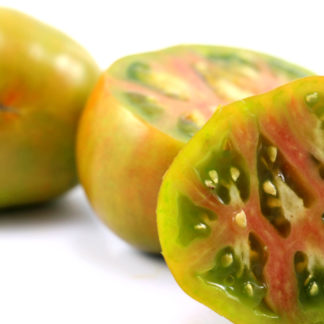