“Sweet Scarlet Dwarf” raises the bar a couple of notches in the world of Dwarf tomato hybridization. My sister grew this in her Sacramento trial garden and thought it was the best tasting tomato she grew during 2014. This one will be around for a long time!

2015 Note: I did additional segregation work on Sweet Scarlet Dwarf and should have the recessive yellow fruit selected out (although it is still possible yellow fruit will occasionally show up).

2016 Note: I grew 15 plants of Sweet Scarlet Dwarf this season and they all produced red fruit. I’m fairly confident that this is now stable for red fruit and don’t expect to see any yellow fruit from this seed harvest.  – Steve

“This variety originated with a cross between Elbe and Golden Dwarf Champion made by Patrina Nuske Small and named Tipsy. Sweet Scarlet Dwarf was selected and named by Craig LeHoullier. The vigorous dwarf potato leaf plants produce a heavy yield of medium to medium large sized (6-16 ounces) oblate, smooth red fruit, possessing a superb, intense, complex flavor – one of the very best flavored of all of the new Dwarf varieties. Due to the challenge of stabilizing the dominant color (red), don’t be surprised if you find an occasional plant producing yellow or orange fruit; be sure to try them, because they will likely be just as delicious. (Dwarf Blazing Beauty is the orange release from this line, and the yellow, Dwarf Golden Gypsy, is on the way soon!). Among those who contributed to stabilizing this new Dwarf variety are Jon Schmuck, Susan Oliverson, Michael Volk, Susan Barber, Patrina Nuske Small, Steve McClaren, Marla McClaren, Dee Sackett, Scott Stough, Ginny Bishton, Wendy Montanez, Amanda Fischer, Linda Black, Bobby Whicker, Kathy Wolfe, Paul Fish, and Kay Robbins. The starting seed sample was grown out and supplied by Bill Minkey.”

For more information on the Dwarf Tomato Project check out the project’s site here or Craig’s site here. 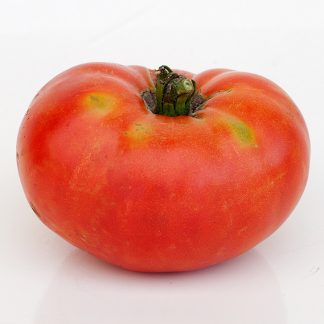