“Listada de Gandia” has a mild flavor and thin skin, nearly as thin as the long Asian eggplant types. The appearance is spectacular, bright nearly mulberry purple and white striped.

The size and shape make Listada de Gandia quite useful in the kitchen. It is a somewhat teardrop shape and may grow to 8”. I was able to easily use it to make Eggplant Parmigiana with Roasted Tomato Sauce (picture) because I could get 3-4 nice slices from each eggplant.

Productivity will vary with location, as these do love humid heat and are said to be day length sensitive. I have read an expectation of 2-4 fruits per plant when grown in Ontario, while here in the Florida Panhandle, I stopped counting at 8 fruits.

History of Listada de Gandia depends upon which vendor’s description you read. It has been described as an Italian heirloom variety from the mid 19th century, which it is not. It has been said to come from southern France, which is not the origin. Listada is, however, from Gandia, Spain. What may confuse those looking for place of origin is that “listada,” meaning “striped,” is a word supposedly shared among Spanish and Italian…but does not translate to this at all in those languages. It does translate to “listrado” in Portuguese and in Galician, which is a language in northwest Spain…north of Portugal. Another consideration is that some say the “Listada de Gandia” that we are growing in the US may not actually be the same variety as the “berenjenas listada de Gandia” actually grown in Gandia. So this may be another striped eggplant from Gandia…or it may be a striped eggplant that I would guess comes from the western side of Spain, rather than the eastern. But this last statement is merely ignorant speculation on my part.
NOTE: Additional stock available. 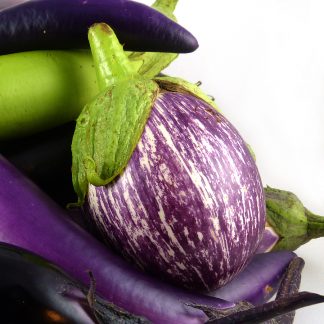