“NuMex Suave Orange” is one of two unique chiles released by the New Mexico State University Agricultural Experiment Station Chile Pepper Institute. There is a red version in addition to this orange version. These are essentially habaneros with little heat. A person like me, who has trouble tasting claims of fruitiness etc. in a blistering chile is able to discern flavors other than fire in this pepper. I am not certain that I could taste the citrus tones reported by others, but it is definitely somewhat fruity. The history is easy to trace on this variety:
“The university’s chile breeding program received the chile pepper seeds from Houston chile aficionado Bill Adams, who liked their mild taste and forwarded the seed to NMSU’s chile institute. Trials were conducted and the best of the lot was chosen for more selective testing. While the Suaves ultimately look similar to their hotter cousins, in the field they’re taller plants with about the same production yield, he said.” http://newscenter.nmsu.edu/Articles/view/6676
Further reports state that Mr. Adams had received these seeds labeled as “Aji Red” and “Aji Orange” from an anonymous individual. The pungency of NuMex Suave Orange is estimated to be 335 Scoville heat units, while the red version is nearly twice that. I would caution growers that hot and dry conditions may produce more pungent fruit, so taste before you plop the whole fruit in your mouth! 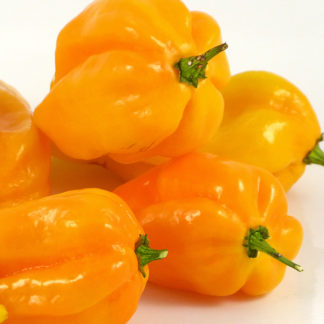